CSES Announcement: Nominations are now being accepted for the 2023 GESIS Klingemann Prize for the Best CSES Scholarship 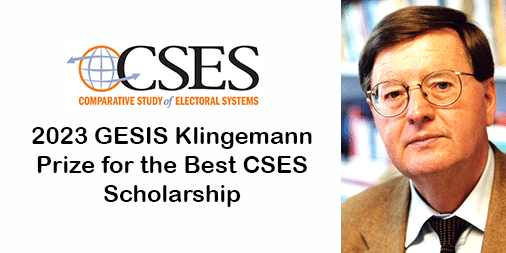 The Comparative Study of Electoral Systems (CSES) and the GESIS – Leibniz Institute for the Social Sciences are pleased to announce a competition for the 2023 GESIS Klingemann Prize for the Best CSES Scholarship for the best CSES scholarship (paper, book, dissertation, or other scholarly work, broadly defined) published in the calendar year prior to the award.

The prize is named in honor of Professor Doctor Hans-Dieter Klingemann, an internationally renowned political scientist, a major contributor to comparative research, and co-founder of the CSES project.

Nominations are now being accepted for the current year’s award. Nominated works must make extensive use of CSES and have a publication date in the calendar year 2022, either in print or online. Anyone is allowed to nominate or self-nominate a scholarly work for consideration by sending an email to the CSES project (cses@umich.edu) naming the scholarly work and providing a justification for its consideration.

All persons are eligible to receive the award, except for the three persons that serve on the Selection Committee for the year. The current year’s Selection Committee is comprised of: Christina Eder of the GESIS – Leibniz Institute for the Social Sciences in Germany (Chair), Irfan Nooruddin of Georgetown University in the United States, and Vicente Valentim of the University of Oxford in England.

Nominations will be accepted until Monday, February 20, 2023.

The award winner will receive a 1,000 Euros prize, and up to an additional 1,000 Euros toward travel, accommodation, and conference registration expenses to attend the award ceremony. This year’s award ceremony is to be held at the annual meeting of the European Political Science Association (EPSA) in Glasgow, Scotland during June 22-24, 2023. The winner of the prize will be asked to make a presentation of their work at the award ceremony.

You may also be interested to read the CSES Blog post about the past year’s winning work, “Parliamentary Representation and the Normalization of Radical Right Support” or to learn more about other past prize winners.

We look forward to your nominations!