A series of volumes based on the Standalone Modules of The Comparative Study of Electoral Systems (CSES) exploring critical theoretical issues and empirical debates in the study of elections and representative democracy have been produced in conjunction with Oxford University Press (OUP). The book series is currently edited by Prof. Ian McAllister, former Chair of the CSES Planning Committee (Module 3) and Principal Investigator of the Australian Election Study (AES). Previously, Prof. Hans Dieter-Klingemann, co-founder of the CSES project, also served as an editor of the series. Details of each volume are available below by clicking on each book description. These volumes provide a rigorous and ongoing contribution to understanding the expansion and consolidation of democracy in the 21st century. 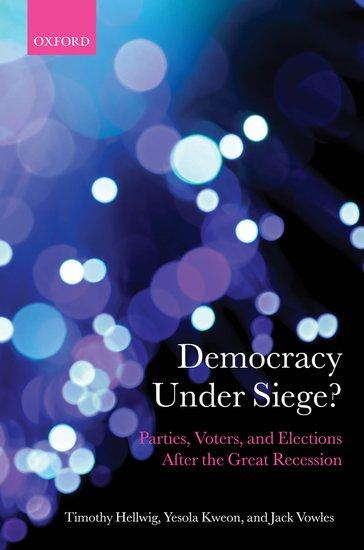 Democracy Under Siege? Parties, Voters, and Elections After the Great Recession

Volume Description from OUP: “The Global Financial Crisis of 2008-2009 was catalyst for the most precipitous economic downturn in eight decades. This book examines how the GFC and ensuing Great Recession affected electoral politics in the world’s developed democracies. The initial wave of research on the crisis concluded it did little to change the established relationships between voters, parties, and elections. Yet nearly a decade since the initial shock, the political landscape has changed in many ways, the extent to which has not been fully explained by existing studies. Democracy Under Siege? pushes against the received wisdom by advancing a framework for understanding citizen attitudes, preferences, and behavior. It makes two central claims. First, while previous studies of the GFC tend to focus on an immediate impact of the crisis, Hellwig, Kweon, and Vowles argue that economic malaise has a long-lasting impact. In addition to economic shock, the economic recovery has a significant impact on citizens’ assessment of political elites. Second, the authors argue that unanticipated exogenous shocks like the GFC grants party elites an opening for political manoeuvre through public policy and rhetoric. As a result, political elites have a high degree of agency to shape public perceptions and behaviour. Political parties can strategically moderate citizens’ economic uncertainty, mobilise/demobilise voters, and alter individuals’ political preferences. By leveraging data from over 150,000 individuals across over 100 nationally-representative post-election surveys from the 1990s to 2017, this book shows how economic change during a tumultuous era affected economic perceptions, policy demands, political participation, and the vote.” 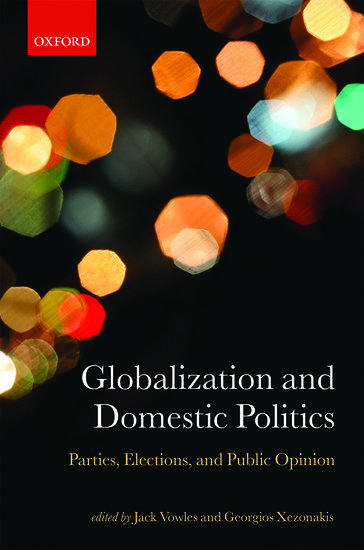 Volume Description from OUP: “Globalization and Domestic Politics addresses how a widely acknowledged and pervasive economic and social process and globalization affect democratic politics among both masses and elites. It inquires into the extent to which, and how, globalization affects the political attitudes and behavior of ordinary citizens and the policies of political parties. Chapters discuss to what extent globalization affects the salience of left-right politics, the content of party programs and promises, leadership evaluations, economic voting, electoral accountability, the influence of religion in politics, electoral turnout, political efficacy, satisfaction with democracy, and the quality of democracy. It primarily draws on data from the Comparative Study of Electoral Systems (CSES), made up of three modules of election surveys from 44 countries and 107 elections.” 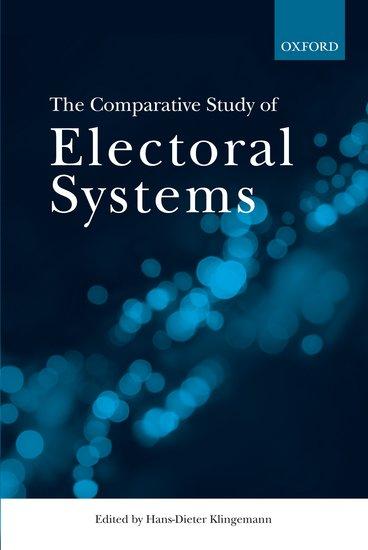 The Comparative Study of Electoral Systems

Volume Description from OUP: “Citizens living in presidential or parliamentary systems face different political choices as do voters casting votes in elections governed by rules of proportional representation or plurality. Political commentators seem to know how such rules influence political behavior. They firmly believe, for example, that candidates running in plurality systems are better known and held more accountable to their constituencies than candidates competing in elections governed by proportional representation. However, such assertions rest on shaky ground simply because solid empirical knowledge to evaluate the impact of political institutions on individual political behavior is still lacking. The Comparative Study of Electoral Systems has collected data on political institutions and on individual political behavior and scrutinized it carefully. In line with common wisdom results of most analyses presented in this volume confirm that political institutions matter for individual political behavior but, contrary to what is widely believed, they do not matter much.” 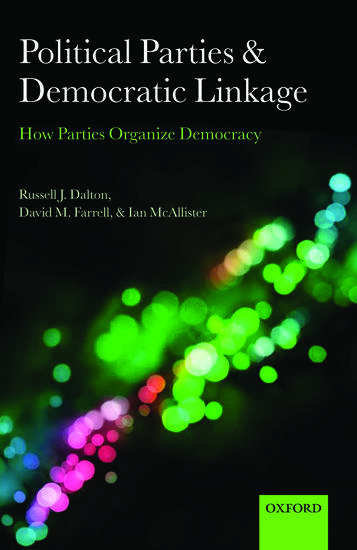 Awarded the GESIS Klingemann Prize for best CSES Scholarship in 2012.

Volume Description from OUP: “Is the party over? Parties are the central institutions of representative democracy, but critics increasingly claim that parties are failing to perform their democratic functions. Political Parties and Democratic Linkage assembles unprecedented cross-national evidence to assess how parties link the individual citizen to the formation of governments and then to government policies. Using the Comparative Study of Electoral Systems and other recent cross-national data, the authors examine the workings of this party linkage process across established and new democracies. Political parties still dominate the electoral process in shaping the discourse of campaigns, the selection of candidates, and mobilizing citizens to vote. Equally striking, parties link citizen preferences to the choice of representatives, with strong congruence between voter and party Left/Right positions. These preferences are then translated in the formation of coalition governments and their policies. The authors argue that the critics of parties have overlooked the ability of political parties to adapt to changing conditions in order to perform their crucial linkage functions. As the context of politics and societies have changed, so too have political parties. Political Parties and Democratic Linkage argues that the process of party government is alive and well in most contemporary democracies.” 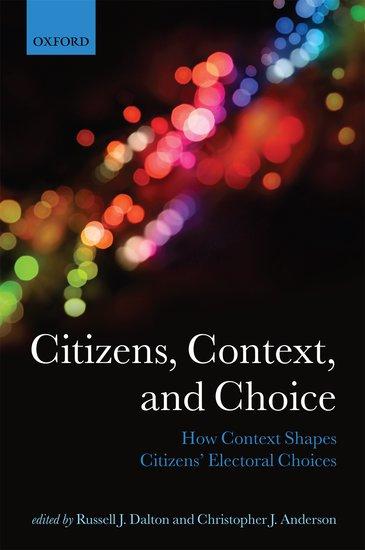 Volume Description from OUP: “A large body of electoral studies and political party research argues that the institutional context defines incentives that shape citizen participation and voting choice. With the unique resources of the Comparative Study of Electoral Systems, this book provides the first systematic evaluation of this topic. A distinguished international team of electoral scholars finds that the institutional context has only a modest impact on citizen political choices compared to individual level factors. Furthermore, the formal institutional characteristics of electoral systems that have been most emphasized by electoral studies researchers have less impact than characteristics of the party system that are separate from formal institutions. Advanced multi-level analyses demonstrate that contextual effects are more often indirect and interactive, and thus their effects are typically not apparent in single nation election studies. The results have the potential to reshape our understanding of how the institutional framework and context of election matters, and the limits of institutional design in shaping citizen electoral behavior.”