“Assessing the Performance of Electoral Democracy” 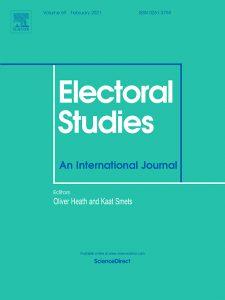 In recognition of the 25th anniversary of CSES project in 2019, a special issue in the renowned peer-reviewed journal Electoral Studies, themed “Assessing the Performance of Electoral Democracy” was commissioned.

An open call for papers was commissioned with over 30 full submissions received. Eventually, seven substantive papers were chosen for publication after peer review. The special issue is also accompanied by an introductory essay by the guest editors. Each paper in the Special Issue is described below.

The guest editors wrote an introduction to the special issue, which is available online.

Ferland: Do people evaluate democracy more positively when the policies adopted by governments are in sync with their personal preferences?

Article Title: “Policy congruence and its impact on satisfaction with democracy”

Article Citation: Ferland, B. (2021). “Policy congruence and its impact on satisfaction with democracy”. Electoral Studies, 69.

Article Abstract: The relationship between what citizens want in terms of policies and what they get from political elites is considered one of the key aspects of representative democracies. Scholars have thus investigated thoroughly the state of citizen-elite congruence in advanced democracies and whether this relationship influences citizens’ democratic satisfaction. These studies do show that citizens’ assessment of their political system and especially their satisfaction with democracy are importantly influenced by the quality of representation and how close they are to their preferred parties or the government position. In the paper, we build on this literature and consider whether congruence between citizen preferences and policies influences citizens’ satisfaction with democracy. This last stage of representation has mostly been overlooked in past research. To address this question, we make use of data from the Comparative Study of Electoral Systems (module 4). Policy congruence is measured based on respondent answers to a series of questions with respect to their preferences on public expenditure in eight policy domains. We also compare the effect of policy congruence to other conventional measures of congruence (e.g. party and government congruence). Our results indicate that this new measure of policy congruence has substantial effect on citizens’ satisfaction with democracy and more so than previous measures of ideological congruence.

What the Guest Editors say about the article: “… what is particularly interesting is Ferland’s innovative way of measuring policy congruence. The author argues that there is policy congruence in a given policy domain when a respondent answers that public expenditure in that domain should remain unchanged. This article is an excellent example that imaginative researchers can use CSES data in ways that were not initially anticipated.”

Williams, Snipes, and Singh: Does gender condition the influence of electoral victory on citizens’ satisfaction with democracy?

Article Title: “Gender differences in the impact of electoral victory on satisfaction with democracy”

Article Abstract: Dozens of studies have shown that individuals who voted for the winning party in an election tend to be more satisfied with democracy than those who did not. However, a number of recent studies – many using data from the Comparative Study of Electoral Systems (CSES) -demonstrate that this relationship varies according to individual- and election-level factors. In this paper, we introduce for the first time gender as a modifier of the effect of winning on satisfaction. We advance a theoretical argument about why gender, independent of its many correlates, should shape the extent to which electoral victory induces satisfaction. Specifically, we argue that the winning effect should be smaller for women than for men because of (1) gender-based differences in political socialization and (2) gaps in the symbolic connection with candidates and parties. Given this, we also expect that the gender gap in satisfaction is moderated by women’s descriptive representation. To test our expectations, we use surveys from Modules I-IV of the CSES coupled with macro-level data sources. Results indicate a robust and precisely estimated gender-based disparity in the impact of winning on satisfaction, with its magnitude being comparatively small among women. This gap is smaller where women are well represented in the legislature, though the gender of the chief executive does not play a conditioning role.

What the Guest Editors say about the article: “…this paper exemplifies a classic use of CSES data by complementing them with other sources such as V-Dem (about the gender composition of legislatures). The paper examines conditional relationships, that is, whether the winner-loser gap depends on gender and whether the differential effect of gender depends on descriptive female representation.”

Article Abstract: A growing body of literature shows that voters tend to vote for candidates who share their own socio-demographic profile. A key reason for this is because they believe those candidates are more likely to promote their preferences and interests. If political representation is important to voters, we might expect young voters to demand better descriptive representation by supporting younger politicians. Recent studies have found an age affinity for turnout and vote choice. However, none of these studies are comparative or focus on leaders. Using cross-national data from the Comparative Study of Electoral Systems project, covering about 853,414 individual voters, 51 countries,126 elections, and 639 unique leaders, I test the hypotheses that a leader is more popular among voters closer to them in age and that such voters are more likely to vote for them. I find some support for both hypotheses though the effects are very small.

What the Guest Editors say about the article: “…There is a massive literature about whether women (or ethnic minorities) are more likely to vote for women (ethnic minority) candidates, but little research has been conducted on age affinity voting. The paper thus fills a big gap. This is a real issue at a time when the two candidates for the U.S. presidential elections are both over 70 years old.”

What the Guest Editors say about the article: “…Guntermann tackles what is perhaps the most widespread concern about democracy, which is that governments are more responsive to the demands of the rich and that as a consequence, economic inequality is transformed into political inequality… This is an excellent illustration of how CSES allows researchers to address big questions about the functioning of democracy.”

Article Title: “How do voters perceive ideological congruence? The effects of winning and losing under different electoral rules”

Article Abstract: The degree of ideological congruence between citizens and their elected representatives is an important feature of democratic systems of government. A long tradition of literature has examined the ideological linkages between citizens and governments, often drawing attention to the differences (or lack thereof) in congruence across different types of electoral systems. Previous research has largely relied on aggregate-level measures of ideological congruence, such as the ideological distance between the position of the median voter and the government. We turn our attention here to how congruence relationships are perceived by individual voters, and how the perceptions of congruence may vary across electoral system types. This individual-level measure of ideological congruence is important in that individual-level, rather than aggregate-level, congruence has been shown to influence other outcomes such as citizen satisfaction with democratic performance. We expect electoral “winners” – those who voted for a party that entered government – to perceive greater ideological congruence between themselves and the government compared to electoral “losers”. We expect this effect to be stronger in majoritarian systems where political competition takes place primarily between two parties, than in proportional systems where electoral losers are more likely to receive a proportional share of representation. We test these expectations by estimating random-effects regressions of perceived individual-level congruence using data from 54 elections held in 23 democracies included in the Comparative Study of Electoral Systems (CSES). The results provide consistent support for our expectations. Electoral winners in all types of electoral systems perceive greater ideological congruence between themselves and the government, and this effect is stronger in majoritarian systems.

What the Guest Editors say about the article: “… The authors are interested in the impact of electoral rules on congruence, which is a long-standing classic question in comparative politics. They find that the overall level of congruence is the same in proportional and majoritarian systems but that the impact of winning (or losing) is bigger in the latter. We see here again how the CSES data can be utilized to develop new measures of representation.”

Wagner: How can we measure affective polarization in multiparty system contexts?

Article Abstract: Affective polarization captures the extent to which citizens feel sympathy towards partisan in-groups and antagonism towards partisan out-groups. This is comparatively easy to assess in two-party systems, but capturing the pattern of affect towards multiple parties is more complex in multiparty systems. This article first discusses these challenges and then presents different ways of measuring individual-level affective polarization using like-dislike scores, a widespread measure of party sympathy. Using data for 51 countries and 166 elections from five modules of the Comparative Study of Electoral Systems, I then show that affective polarization adds to existing concepts as a way of understanding political participation and democratic orientations. Studying affective polarization outside the US could therefore have important consequences for our understanding of citizen perceptions of politics as well as citizen behaviour, but we need the appropriate measures to do so.

Article Title: “Affective polarization and the salience of elections”

What the Guest Editors say about the article: “The authors exploit the fact that CSES respondents were interviewed at different times, some just after the election and others months later, and show that polarization decreases as time elapses since the day of the election, controlling for country-election differences in the timing of interviews as well as characteristics of respondents related to their reachability… Here again, the like-dislike scores for the various parties are mobilized (to measure affective polarization), and ingenious researchers use a variable, time of the interview, that was initially collected for administrative purposes.”