CSES Announcement: Winner of the 2022 GESIS Klingemann Prize for the Best CSES Scholarship 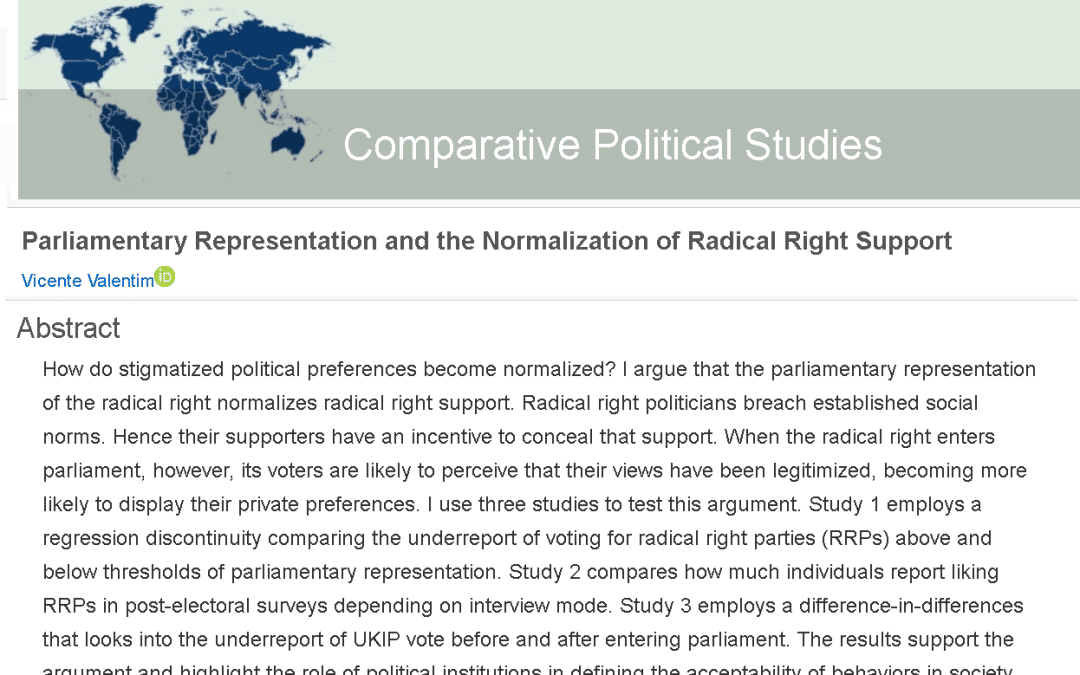 We are pleased to award the 2022 GESIS Klingemann Prize for the Best CSES Scholarship to “Parliamentary Representation and the Normalization of Radical Right Support”, authored by Vicente Valentim of the European University Institute and published in Comparative Political Studies.

The current year’s Selection Committee was comprised of: Axel Burger of the GESIS – Leibniz Institute for the Social Sciences in Germany, Orit Kedar of the Hebrew University of Jerusalem in Israel (Chair), and Enrique Hernández of the Universitat Autònoma de Barcelona in Spain. The Selection Committee described their selection of the winning work as follows:

In this study, the author argues that attaining parliamentary representation reduces stigma and normalizes support for radical right parties. To test his claim, he conducts three studies that draw on observational data, employ sophisticated research designs, and complement each other in drawing on multiple evidence. The first study draws on CSES data and applies a regression discontinuity design to assess whether respondents are less likely to post-electorally underreport their support for radical right parties if these parties attained a parliamentary seat. The second study analyzes how the degree of privacy in CSES interviews, determined by the mode of interview, is correlated with self-reported support for radical right. The third study focuses on the UK and assesses how underrepresentation of UKIP voters in the British Election Study depends on the party’s presence in parliament. Overall, the three studies find support for the hypothesized relationship. The article makes a vital contribution to contemporary debates about the normalization of stigmatized political preferences.

The Selection Committee has also awarded an honorable mention to the article “Government alternation and proximity voting: How policy change opportunities shape electoral behavior” by Carolina Plescia of the University of Vienna and Francesco Zucchini of the University of Milan, published in West European Politics. The Selection Committee described their selection of the honorable mention as follows:

In this paper, the authors argue that strategic considerations of voters due to post-electoral bargaining substantially diminish when a change in policy is unlikely. In fact, the authors hold that under such circumstances proximity voting well describes voter considerations. The authors undertake two studies to test their argument. In the first, they utilize CSES data and conduct two-stage estimation. They show that probability of government alternation affects the degree to which the vote is motivated by proximity voting. The second study employs explicit voter evaluation of the likelihood of government alternation and corroborates the findings of the first study. The article makes an important contribution to our understanding of how contextual factors influence the processes underlying voting decisions in multiparty systems.

The CSES would like to thank the Selection Committee for their work and the many persons who nominated works for consideration. We furthermore thank the GESIS – Leibniz Institute for the Social Sciences for their sponsorship and support of the prize since its establishment in 2011.

The GESIS Klingemann Prize for the Best CSES Scholarship is awarded for the best CSES scholarship (paper, book, dissertation, or other scholarly work, broadly defined) published or finalized in the calendar year prior to the award. The prize is named in honor of Professor Doctor Hans-Dieter Klingemann, an internationally renowned political scientist, major contributor to comparative research, and co-founder of the CSES project.