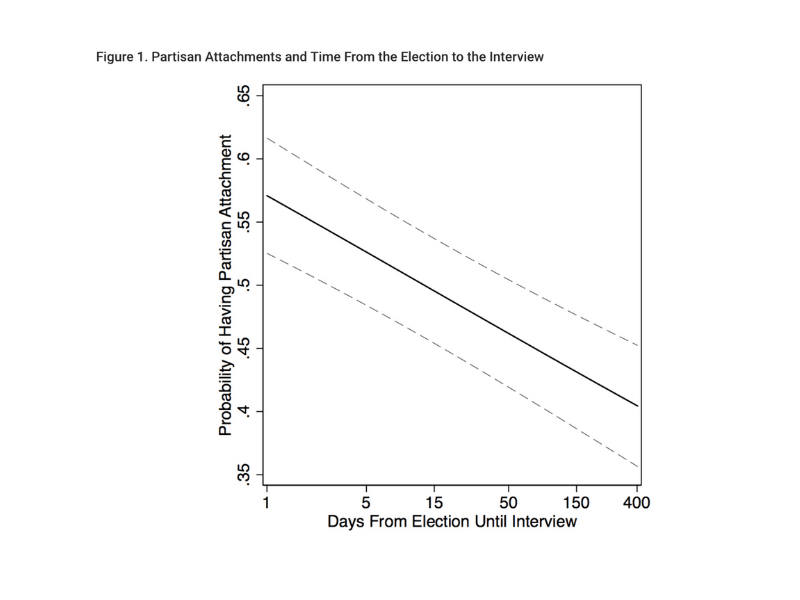 It has long been argued that elections make underlying partisan predispositions more prominent. However, existing observational research on this topic is limited by the lack of an exogenous measure of election salience. To overcome this, in our recent article in the American Political Science Review, we leverage the fact that the dates on which Comparative Studies in Electoral Systems (CSES) respondents are interviewed within each post-election survey are likely unrelated to partisanship and its correlates, and we use the number of days between the day of the election and the date on which a respondent was interviewed to capture election salience. Under the assumption of as if random interview assignment within election surveys, we are able to identify the causal effects of election salience on partisan attachments.

We account for the fact that survey firms operate under varying constraints and schedules across countries. For example, all interviews in one country may occur within a few weeks following the election, whereas in another country, the interviews might take several months to complete. Thus, in addition to estimating a random intercept for each CSES election survey in each country, we allow the effect of our measure of election salience to vary across surveys.

Using data from Modules 1-3 of the CSES, our findings demonstrate that as the distance between the timing of a survey interview and the election increases, CSES respondents are less likely to identify with a party; those who do identify with a party tend to do so less strongly; and the relationship between partisanship and evaluations of incumbent parties weakens. These results are illustrated in Figures 1, 2, and 3, respectively.

Figure 1. Partisan Attachments and Time From the Election to the Interview 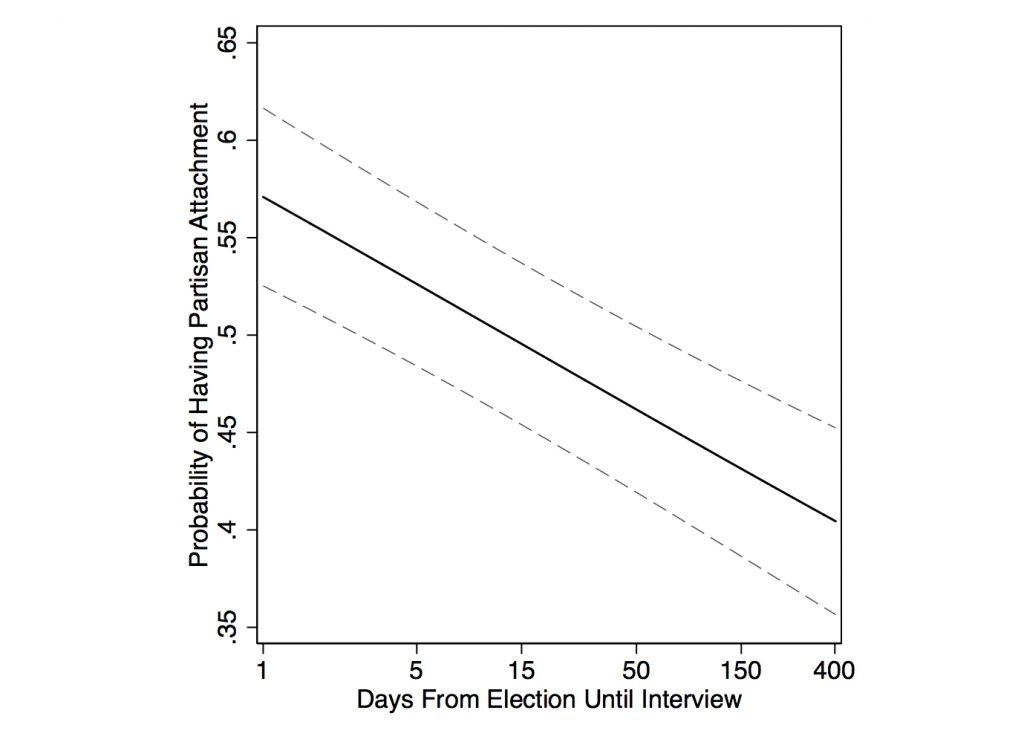 Figure 2. Partisan Attachment Strength and Time From the Election to the Interview 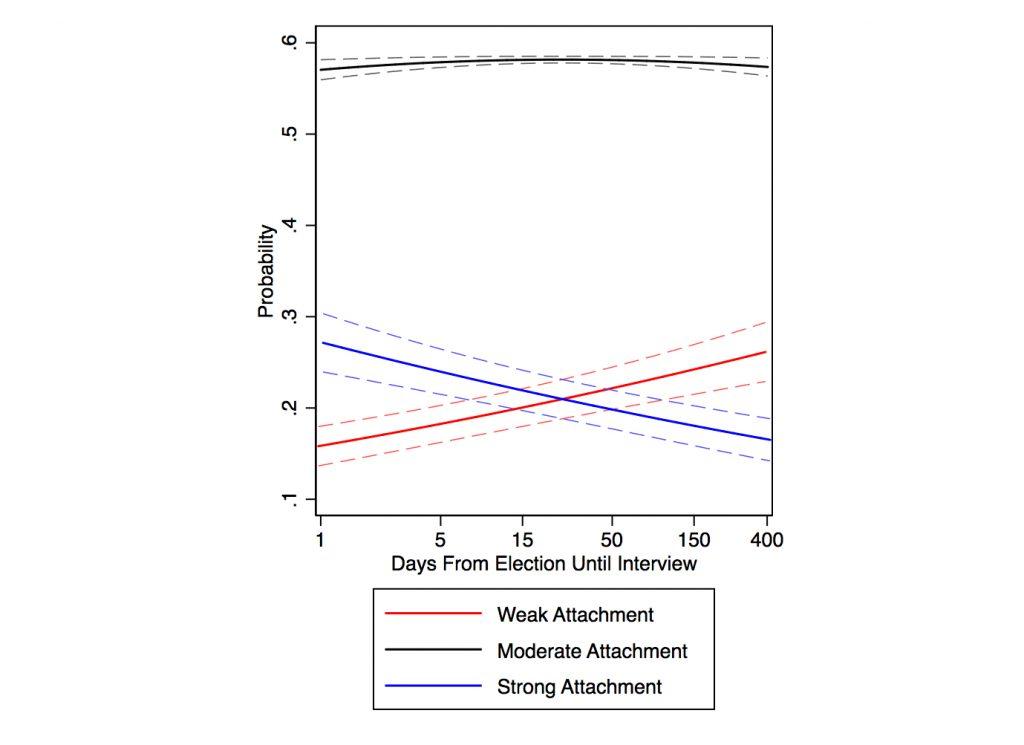 FIGURE 3. The Impact of Copartisanship on Incumbent Evaluations and Time From the Election to the Interview 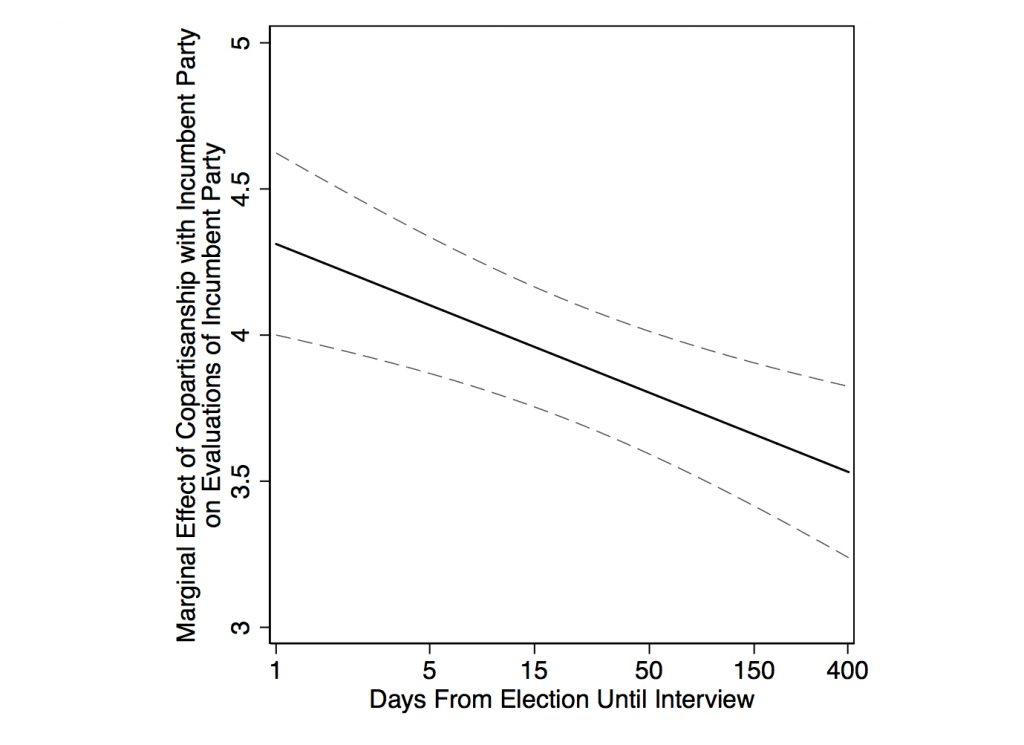 To examine the plausibility of our assumption of as if random assignment of interview dates within surveys, we checked whether several potential confounders predict the time between the election and the date of interview. We found only trivial relationships between relevant individual characteristics and the date on which one was interviewed. Thus, we are confident that the relationships shown in Figures 1-3 are truly due to the time from the election to the interview.

Our results substantiate the causal role that elections play in activating partisanship, and they are consistent with a growing body of evidence indicating that although partisanship is very stable, it nevertheless responds to the external environment. Finally, beyond our substantive conclusions, we believe we have highlighted an important methodological issue: the timing of election surveys can impact the pattern of responses.