Linking Party Preferences and the Composition of Government: A New Standard for Evaluating the Performance of Electoral Democracy 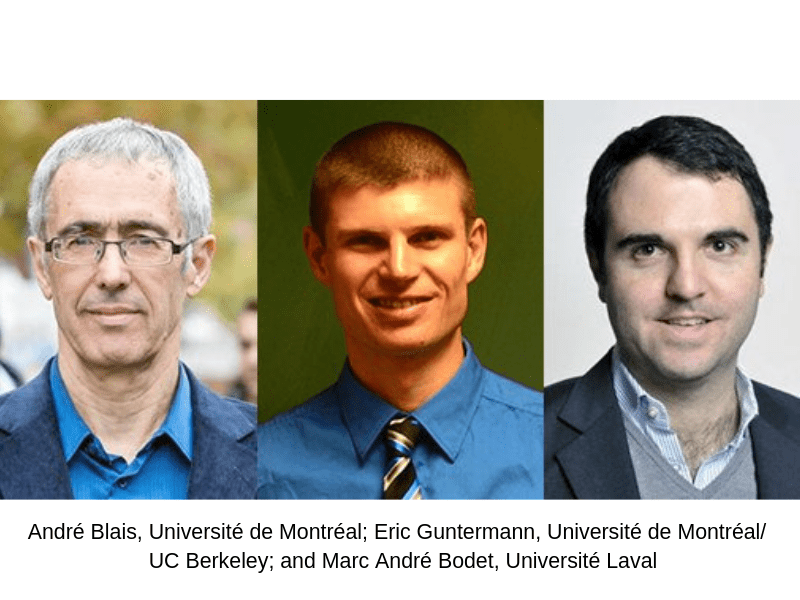 Linking Party Preferences and the Composition of Government: A New Standard for Evaluating the Performance of Electoral Democracy

Elections are supposed to enhance the link between citizens’ preferences and the composition of government. Proportional representation (PR) has traditionally been assumed to strengthen that link since it allows a fair transformation of vote shares into seat shares in parliament. That assumption has been challenged in previous research (Blais and Bodet 2006; Golder and Stramski 2010) which shows that PR elections do not produce greater congruence between citizens’ and governments’ ideological orientations. We argue that elections are not only about ideology; they are first and foremost about which parties will govern. We therefore propose a new and original standard for evaluating the performance of electoral democracies: the degree of correspondence between citizens’ party preferences and the party composition of the cabinet. That standard is based on the simple (and reasonable) assumption that democracy works better when people are governed by parties that they like and not by parties they dislike.

We propose three specific criteria for assessing the correspondence between citizens’ party preferences and the party composition of the cabinet:

We use CSES data that include a party like/dislike question in which respondents are asked to rate each party on a 0-10 scale.

We focus on lower house elections in non-presidential democracies. Our sample includes 87 legislative elections held in 35 countries. We distinguish elections held under PR and under non-PR and on the basis of disproportionality between vote and seat shares. For each party, we compare its ratings in the electorate and the proportion of seats it had in the cabinet that was formed after the election.

Criterion 1: How many citizens have their preferred party in government?

More people have their preferred party in government under PR, and this is due to the fact that PR leads to the presence of more parties in the cabinet. As is shown in Figure 1, 50% of citizens, on average, get their most liked party in government under PR, compared with 43% in non-PR elections. On this first criterion, PR elections perform better.

Figure 1: Average percentage of citizens whose preferred party is in government by electoral system 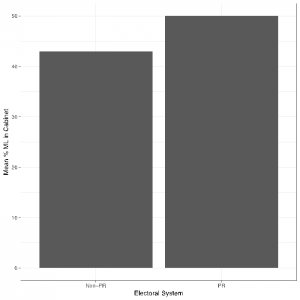 Criterion 2: Is the most liked party in government?

Figure 2: Percentage of elections in which the overall preferred party is in government by electoral system 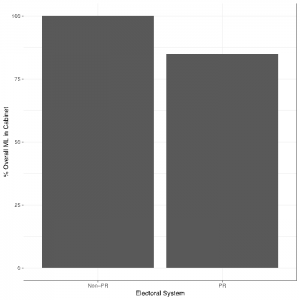 Governing parties are better liked than opposition parties in 82 of the 87 elections. But the mean differential, as can be seen in Figure 3, is slightly more positive in non-PR elections. This is so because PR elections usually lead to the formation of coalition governments that often include at least one small party, and small parties are usually less liked than large parties. On this third criterion PR elections also perform worse

Figure 3: Average difference between weighted ratings of parties in government and opposition 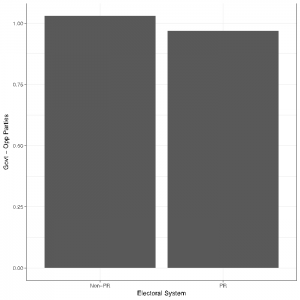 We propose a new perspective for evaluating the performance of electoral democracies that focuses on the link between citizens’ party preferences and the composition of government. Simply put, democracy performs better when governing parties are better liked than non-governing parties since people prefer to be governed by parties that they like. We propose three specific criteria for assessing that correspondence. We find that PR elections perform better on one criterion and worse on the other two. In short, before concluding that one system is better than the other we must decide which aspects of citizens’ preferences matter the most.