Do Bad Economic Conditions Explain the Success of Radical Left Parties in Europe?

While most of the literature on economic voting focuses on mainstream parties, and particularly on the incumbent party, little is known about how support for non-mainstream parties is affected by bad economic conditions. The literature on radical-right and Green parties is inconclusive, as unemployment has been found to have positive, negative or no significant effects depending on the study (Mudde 2007: 205-206; Müller-Rommel 1998). It has been often argued that these parties do not fare particularly well in contexts in which the economy becomes particularly salient because they tend to focus on values rather than economic issues (Ivarsflaten 2005).  In contrast, previous aggregate-level studies on the radical left had found a positive correlation between unemployment rates and radical-left parties’ (RLP) vote share in European countries (March and Rommerskirchen 2015). This is consistent with anecdotal evidence from the Great Recession, when RLPs fared remarkably well in countries with particularly high unemployment rates like Greece and Spain.

In our recent study published in Party Politics, Beyond the 2008 Great Recession. Economic Factors and Electoral Support for the Radical Left in Europe, we argue that economic conditions have an unconditional impact on voters’ probability to support RLPs in Europe. This is because, unlike other non-mainstream parties, the radical left tends to focus very strongly on economic issues such as unemployment and redistribution, and this is the case even for those RLPs that have adopted a new left agenda based on socio-cultural cosmopolitan/libertarian values (Gomez et al. 2016). We therefore theorize that contexts of high unemployment will be particularly suitable for RLPs to attract new voters. We also theorize that the effect might not be the same for all voters. First, it is possible that bad economic conditions only encourage those with a leftist ideology to vote for RLPs. Conversely, as voters with weak party attachments have been shown to be more strongly influenced by economic performance (Kayser and Wlezien 2011), it is possible that economic conditions may contribute to increasing support for RLPs among less ideological voters. Lastly, we hypothesize that negative economic conditions might not help RLPs if there is a right-wing incumbent, because strategic voting could mean voters concentrate around larger mainstream left-wing parties to try and eject the government.

Our study relies on individual-level data to explore this topic. We use data from four waves of the Comparative Study of Electoral Systems (CSES) in combination with another six national election studies. Our sample covers 56 elections between 1996-2016 across the 15 European countries where RLPs had gained seats in the national or European parliament during the period of study. Using multilevel logistic regression models, we find that unemployment rates have a positive unconditional effect on the probability to vote for an RLP (Figure 1) even after controlling for a number of individual-level characteristics, including labour market status, ideology, etc. To be more precise, support for RLPs raises from 5.3% when unemployment is low (2%, which is the sample minimum) to 22.8% when unemployment is high (24%, which is the sample maximum). Importantly, the effect of unemployment does not seem to be driven by any particular election. Also, it does not seem to be associated with cross-country differences but with changes in unemployment rates across elections.

Figure 1: Average Predicted Probabilities to Vote for an RLP over Unemployment Rates with 95% CIs. 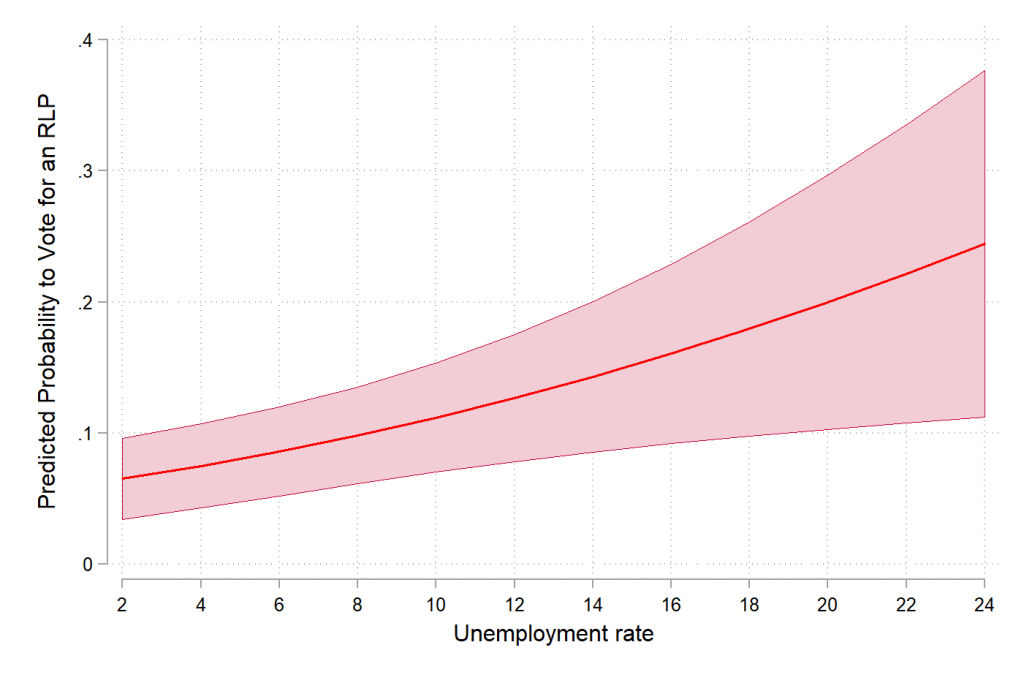 We did, however, not find evidence that the effect of unemployment depends on whether the mainstream left was in power or not before the election. Similarly, we did not find evidence that the effect of unemployment is stronger for voters with a leftist ideology (Figure 2). And, although support for RLPs increases slightly more rapidly among non-ideological voters (i.e. those who cannot place themselves on a left-right ideology scale) and those with a centre-left ideology than among left-wing voters when unemployment rates are higher, differences are not statistically significant.

Figure 2: Average Predicted Probabilities to Vote for an RLP over Unemployment Rates, by ideology, with 95% CIs. 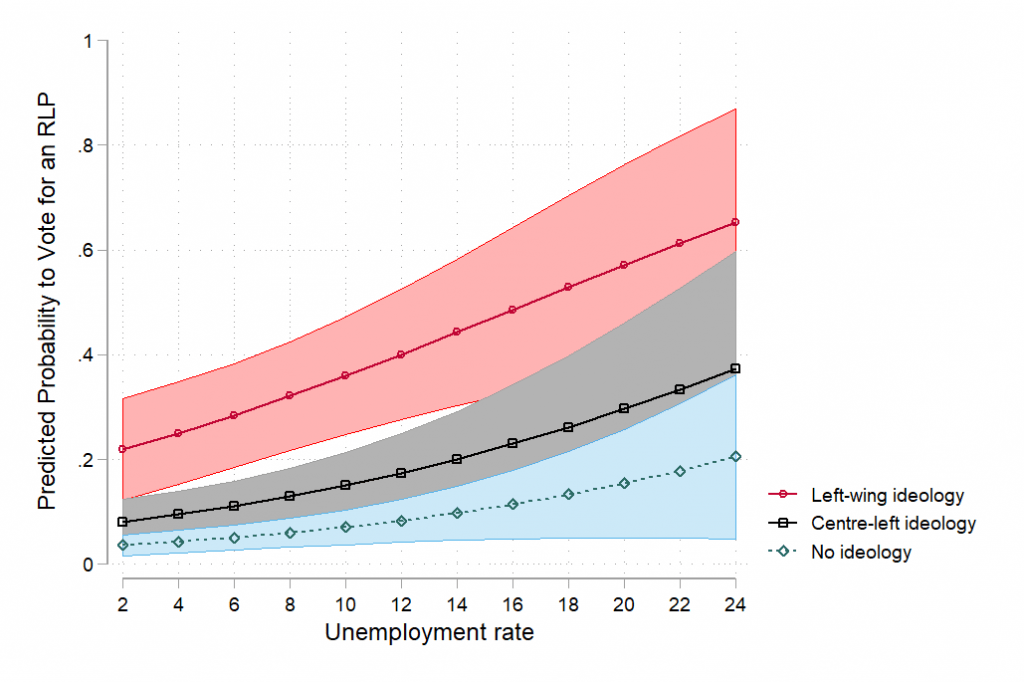 All in all, our findings demonstrate that unemployment has a strong impact on the success of RLPs in Europe, but they also speak to the limits RLPs face in order to broaden their support base beyond strongly ideological voters. Whether unemployment is high or low, on average voters with a leftist ideology are respectively 2.3 and 4.8 times more likely to support an RLP than those with a center-left ideology and no declared ideology. And there is no evidence that the proportion of voters who hold a radical-left ideology increases with higher unemployment (Visser et al. 2014). While there is anecdotal evidence that some RLPs, such as Podemos or Syriza, have been able to become particularly successful among moderate and non-ideological voters, our study puts into question that a favorable economic context is a sufficient condition for that to happen.

Gomez, R., and L. Ramiro. 2017. Beyond the 2008 Great Recession. Economic Factors and Electoral Support for the Radical Left in Europe, Party Politics.