The Bipolar Voter: On the Effects of Actual and Perceived Party Polarization on Voter Turnout in Multiparty Democracies

The Bipolar Voter: On the Effects of Actual and Perceived Party Polarization on Voter Turnout in Multiparty Democracies
Mert Moral

Although it has long been argued that both diversity and distinctiveness of party policy offerings influence electoral behavior, few studies to date have investigated the effect of political polarization on voter turnout. While comparative research on the topic is limited to a handful of studies employing aggregate-level data, previous individual-level studies focus only on the two-party system in the US.

On the one hand, some individual-level studies expect high party polarization to provide citizens with clearer cues about party positions and higher salience of policy stakes. Others, on the other hand, argue that polarization disengages citizens who are intolerant of ideological conflict. Furthermore, their findings are contingent on a number of party system- and individual-level factors that are left unexplored due to their focus on a single party system with high and rapidly increasing party, elite, and electoral polarization in recent decades.

In my article entitled The Bipolar Voter: On the Effects of Actual and Perceived Party Polarization on Voter Turnout in European Multiparty Democracies, recently published in Political Behavior, differently from previous studies on the topic, I ask whether high and increasing party polarization have differential effects on voter turnout. Aside from these two sources of variation at the party system level, I also take account of individuals’ perceptions of party polarization asking whether citizens who perceive party polarization as more (less) are more (less) likely to turn out to vote.

Figure 1: Effects of Perceived and Actual Party Polarization on Turnout 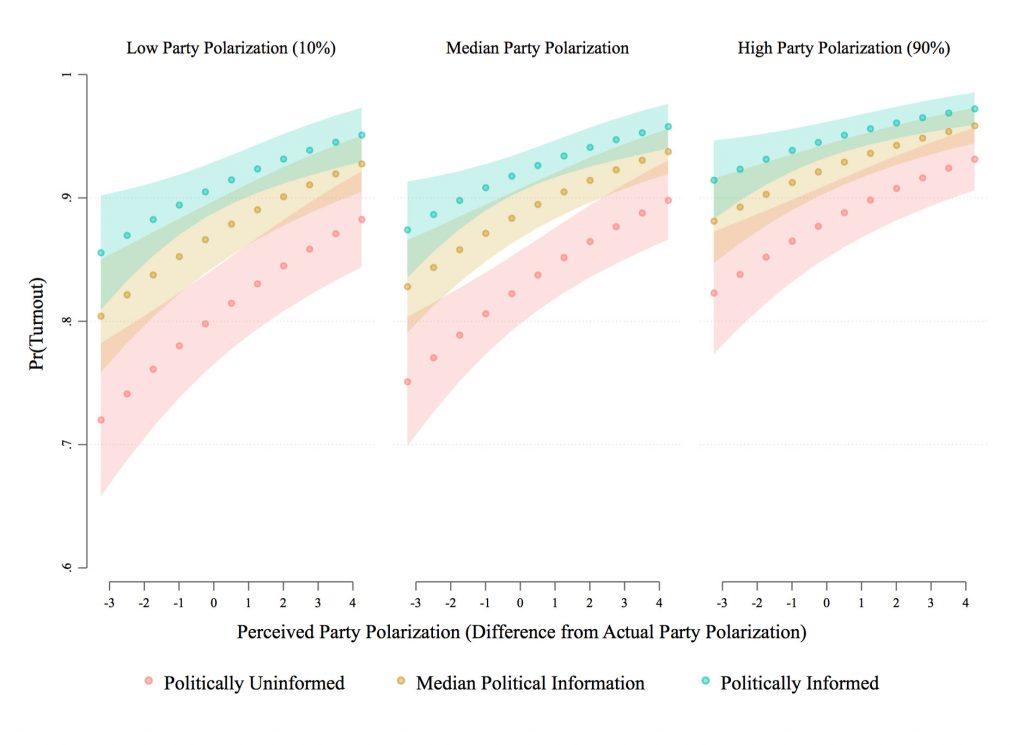 The first important finding from Figure 1 is that politically sophisticated, or informed as approximated in the analyses, citizens are more likely to turn out than the unsophisticated. This can be observed when the differences in the predicted probabilities of politically informed and uninformed individuals are compared in each panel. When the low (leftmost) and high (rightmost) party polarization plots in Figure 1 are compared, we can also observe that both sophisticated and unsophisticated individuals are more likely to turn out in party systems with higher party polarization.

Calculated by setting the actual party polarization and other explanatory variables to their respective means and medians in the sample limited to party systems with available survey data for two consecutive elections, the predicted probabilities in Figure 2 show that increasing party polarization between consecutive elections significantly increases the likelihood of turnout. While politically sophisticated citizens, who are more likely to follow the changes in party positions and are better represented by parties responding to their policy demands, are mobilized by increasing polarization, this is not the case for the least sophisticated segment of the electorate.

Figure 2: Effects of Perceived and Change in Party Polarization on Turnout 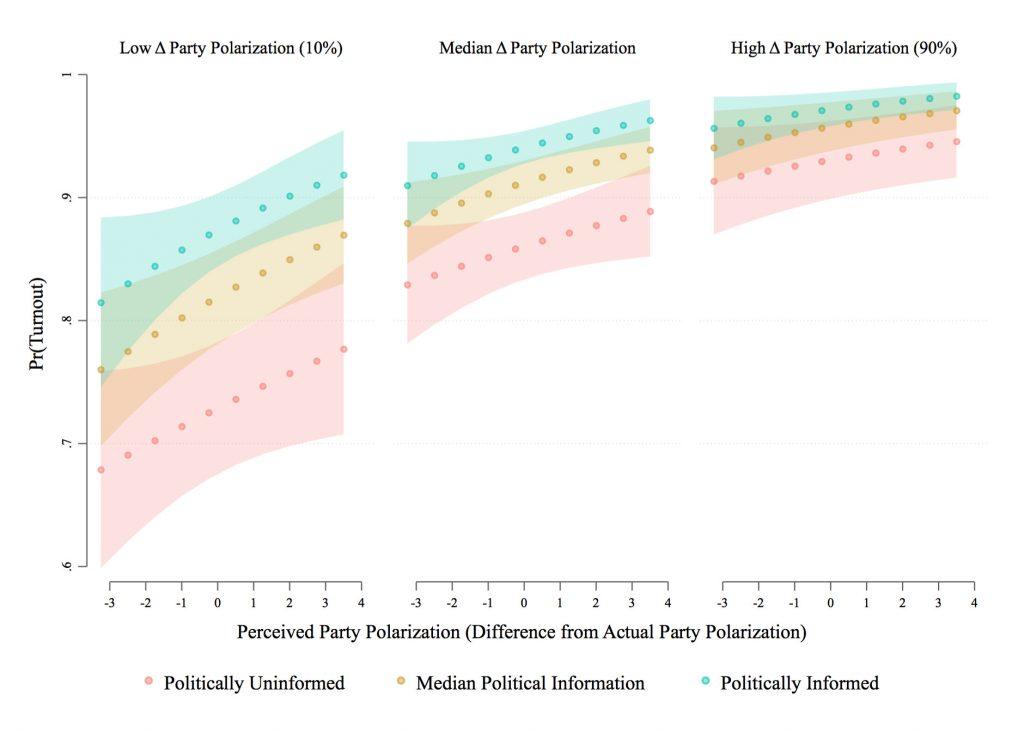 Consequently, an important conclusion from the empirical analyses is that when all three components of party polarization –i.e., the differences across party systems, the short-term change in party polarization within particular elections, and the heterogeneity among individuals in their perceptions of polarization, the short-term change in party polarization is the substantively most significant determinant of voter turnout. The first substantive takeaway from this first individual-level comparative study on the effect of party polarization on voter turnout is that abstention from alienation may not be a concern in multiparty democracies to the extent they put on offer both centrist and extreme party policies to their electorates. Secondly and relatedly, not only more numerous but also more distinct party policies are needed to encourage and sustain higher political participation.