How Does Partisanship Irrationalize the Decision to Vote in Western and Postcommunist Democracies?

How Does Partisanship Irrationalize the Decision to Vote in Western and Postcommunist Democracies?
Dong-Joon Jung

The rational choice model of voting assumes that people decide whether to vote as a consequence of the calculation of the benefits and costs associated with voting (Downs 1957; Riker and Ordeshook 1968). According to the model, only those who expect the benefits they will receive to exceed the costs they have to pay would turn out to vote. Often, however, the assumption of rationality betrays the reality; people still vote even though they are clearly aware that the benefits will not be greater than the costs.

In my recent study published in Electoral Studies, Irrationalizing the Rational Choice Model of Voting: The Moderating Effects of Partisanship on Turnout Decisions in Western and Postcommunist Democracies, I focus on partisanship as one of the factors that could motivate voters to behave in such an irrational manner. Partisanship, commonly defined as one’s psychological attachments to particular political party or parties (Campbell et al., 1960), has been regarded as one of the most consistent predictors of turnout. Despite the popularity of partisanship as an independent turnout predictor in the literature, however, its interactions with the costs and benefits of voting have been underexplored. Due to its emotional aspect and influences on one’s political attitudes and behaviors, partisanship may reduce the effects of the rational components of voting. To put it differently, partisan allegiances may contribute to irrationalizing individuals’ turnout calculations.

Data from four waves of the Comparative Study of Electoral Systems (CSES) are used: 41 elections from 16 Western democracies and 16 elections from 10 Postcommunist democracies. Using a series of multilevel probit models, I find that partisanship in general works to promote turnout mainly by weakening the effects of the intrinsic benefits of voting and partly by reducing the role of its information costs (Figure 1). That is, partisanship influences turnout decision jointly with the other determinants of turnout such as the level of political information and electoral efficacy. As to the expected benefit, however, neither whole- nor split-sample tests have exerted significant effects for its interaction with partisanship. 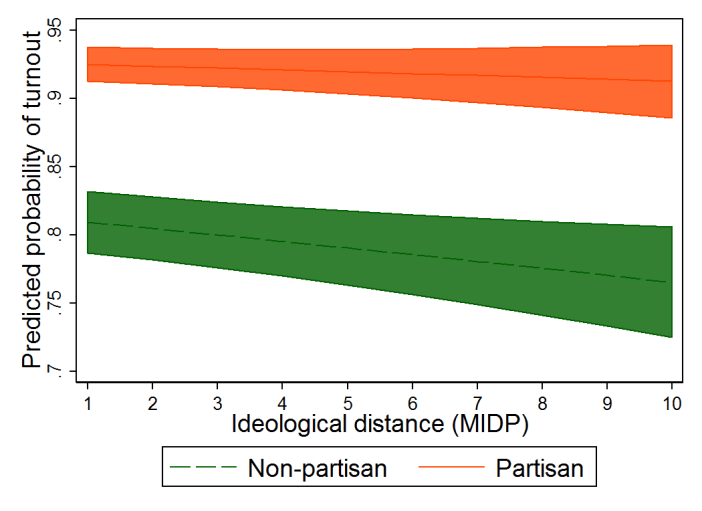 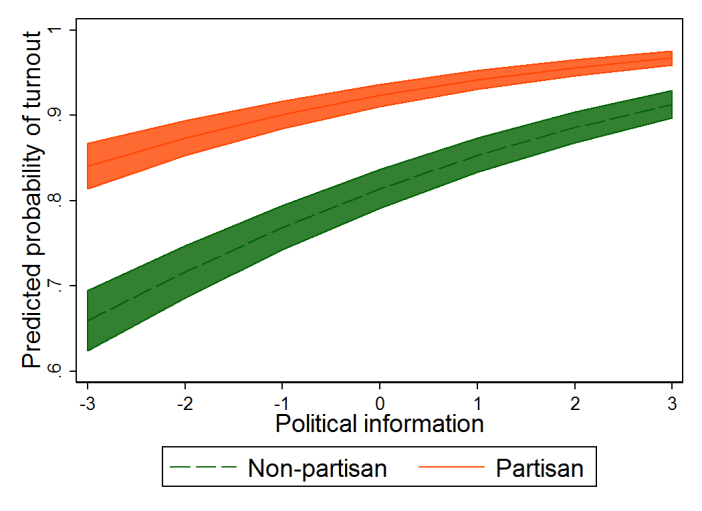 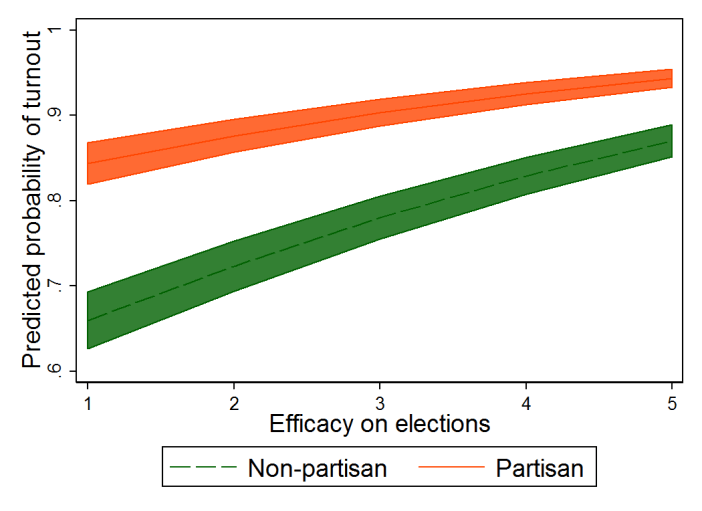 With regard to the information costs, the two groups of voters tend to differ in how partisanship interacts with the level of political information. Whereas partisanship has effectively weakened the extent to which information levels determine turnout likelihood among the Western voters, it has failed to do so among their Postcommunist counterparts. This variation might have derived from differences in the duration of party systems and the extent of party system institutionalization. In aged and stable party systems where a party’s political stand is more discernible, it is possible to use partisanship as a shortcut that lowers the cognitive bar of participating in elections. In the Postcommunist context where party systems have been unstable, by contrast, frequent merges, splits, entries and exits of parties have kept voters from taking advantage of partisanship as such a heuristic even when they are more in need of it.

Both regions also vary when it comes to how significantly the effect of the intrinsic benefits of voting on turnout declines as one identifies with a particular party. As partisanship is found to bring voters with lower levels of trust in elections to get out to vote in Western democracies, expressing their emotional support for a party by participating in elections provide them with intrinsic satisfactions that sufficiently supplement their lack of political efficacy. This is particularly true in Western democracies where partisanship has developed for more than a century and largely worked as a social identity, so voting is not just a political activity but also a social one by which voters feel a strong bond to a group they support. However, this is not so much the case for the Postcommunist voters whose party attachments are not as aged and engraved. Especially given frequent changes in the supply of parties, it is no wonder to see their partisanship penetrate into the society less thoroughly as its Western counterpart.

The findings of this paper pose a couple of substantial implications particularly for the Postcommunist context. First, we need to be more concerned about low levels of party system institutionalization in the Postcommunist democracies, which may be a main culprit for hindering partisanship from prompting poorly informed citizens to turn out. Party organizations and membership frequently change for the sake of the party elites’ political interests and so voters can hardly make use of partisanship as an effective tool to address their cognitive limitations in participating in elections. Therefore, for Postcommunist democracies to have higher turnout rates it is crucial that have more institutionalized party systems so partisanship can serve as a turnout promoter for underinformed citizens.

Second, that Postcommunist partisanship does not give as strong expressive feelings as its Western counterpart, calls into question the previous arguments that learning effects take place faster than anticipated in the Postcommunist region to the point where the level of Postcommunist partisanship is almost equivalent to that in Western democracies. Although it might be true that the percentage of voters who claim some level of party attachment increases to some extent, it could be a mere lip service that does not necessarily produce similar political effects. Therefore, we should contextualize the region’s development of partisanship by exploring its various political impacts both independently and interactively, which is what this analysis seeks to do.