Normative theory suggests that choosing an ideologically close political party is a sign of rational political behavior. Reality, however, sometimes differs from the norm, and voters chose ideologically distant parties. The results of an examination into the macro-level factors that affect the extent to which citizens base their party preferences on ideological proximity were presented at the 7th Annual Conference of the European Political Science Association (Milan, June 22 – 24, 2017).

The two models have been submitted to various empirical tests and comparisons. The extant research is mostly individual-level and findings suggest that factors such as education, political interest, knowledge, ideological profile, party identification, and efficacy, tend to correlate with both models of spatially-based preferences. There is little evidence on the system-level factors that may affect the applicability of the two spatial models. An important representative of this developing area is a study by Singh (2010) that found that proximity voting is indeed influenced by political context. For instance, it is reported that complexity of political environment, represented by the number of political parties, reduces proximity voting.

The current study asks the following question: How are macro-level variables related to the power of proximity and directional models in accounting for party preferences?

The objective is therefore to find system-level predictors of the success of spatial models in predicting party preferences. Most of the data used to investigate this question come from Module 4 of the Comparative Study of Electoral Systems (CSES). The analysis is based entirely on aggregate-level data from 36 countries, using macro-level variables and some micro-level variables to produce system-level estimates.

The outcome to be predicted is the strength of the spatial connection, that is, the association between one’s ideological location and party utility, based on proximity and direction, averaged over all relevant parties in a country. The analysis controls for system complexity (i.e., the number of political parties), electoral system, the quality of democracy (e.g., political freedom, corruption), socioeconomic welfare, and the clarity of political supply (measured using the Party System Polarization Index, provided by R. J. Dalton via CSES), which should all affect party preferences.

The results show that, overall, both proximity and direction significantly predict party preferences. Contrary to expectations, electoral systems do not differ in the extent in which the spatial models account for party utilities. Similar results were obtained for system complexity. Indicators of the quality of democracy, however, significantly predict performance of both spatial models (Figure 1). 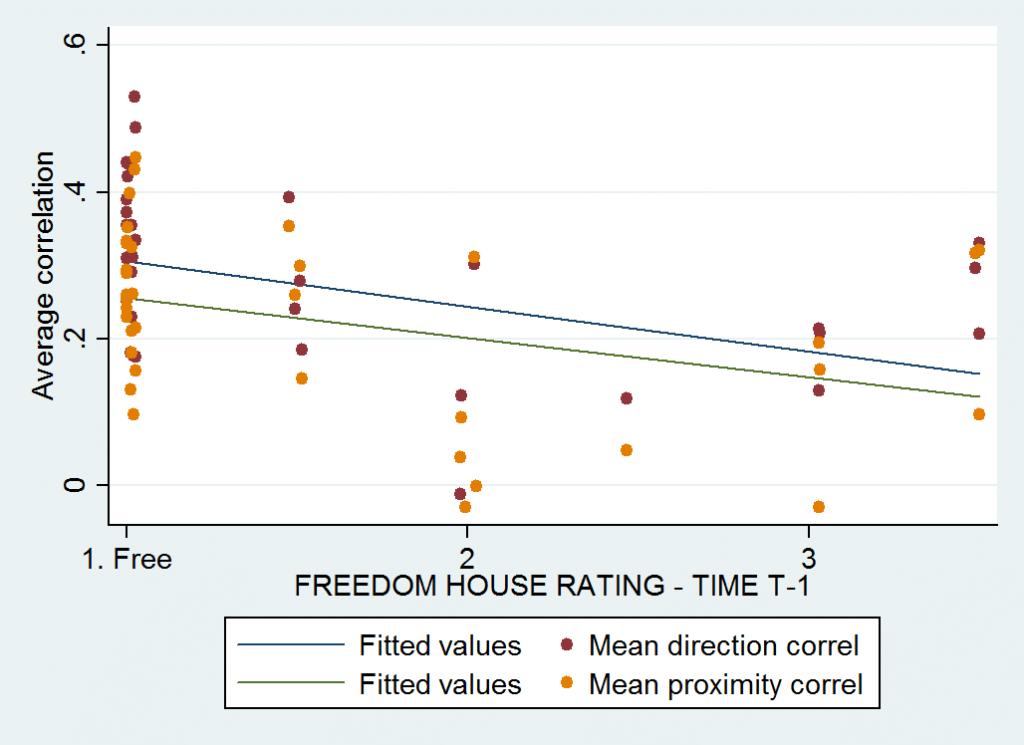 On average, even stronger associations were obtained for the measures of the socio-economic development. For instance, the national-average correlation for the directional model significantly correlates with GDP (r = .50, p < .001), and with education (r = .45, p < .01) (Figure 2).

The most impressive association, however, was obtained for the clarity of political supply. As shown in Figure 3, the Party System Polarization Index strongly correlates with the national-level proximity coefficient (r = .87, p < .001) and with the directional association (r = .78, p < .001). 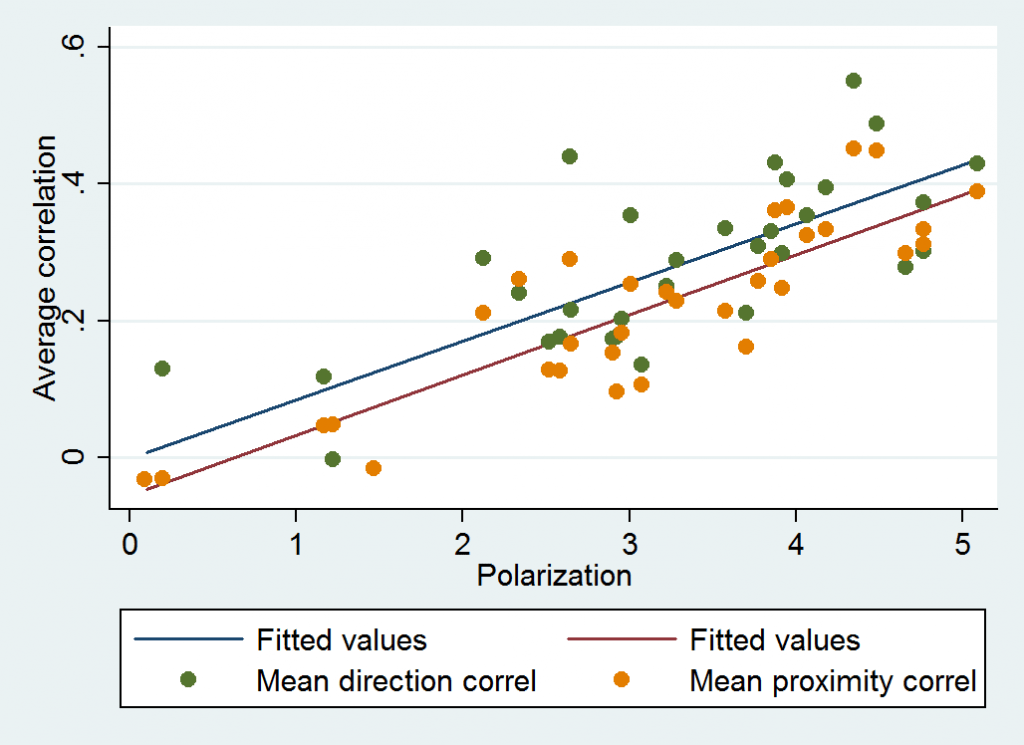 In summary, the results suggest that spatial models are successful in accounting for party preferences. Some of the examined macro-level factors help understand the variations in the performance of the spatial models. Spatial models are more successful in more stable, established democracies. They also better represent preferences where citizens have more resources and enjoy a higher standard of living. Finally, quality of choice is important too, as ideological diversity among political parties is a condition that favors spatial models. This supports Singh’s (2010) findings for proximity and vote choice. An implication of this work is that deliberate manipulation of systemic features is unlikely to advance “rational”, that is spatial, party preferences.

Merrill, S., & Grofman, B. (1997). Directional and proximity models of voter utility and choice: A new synthesis and an illustrative test of competing models. Journal of Theoretical Politics, 9, 25-48.