Coping with Complexity: How Voters Adapt to Unstable Parties

Nearly five decades ago Carl Friedrich remarked: “Party development is more highly dynamic than any other sphere of political life; there is no final rest, no ultimate pattern… Rather, there is constant change in one direction or another” (1968, p. 452). With new parties emerging across the continent and existing ones reshuffling, Friedrich’s remarks are as true today as ever.  In Coping with Complexity I investigate how party changes — when parties emerge, fuse, split and die off — shape voter decision-making at the ballot box.

How do voters decide in such elections? I show that the process is two-fold. First, instability in parties raises the cost of acquiring information. As a result voters tend to be less knowledgeable about the policy stances of competing parties. I characterize this first effect as passive on the part of voters – given the lower quality of information and it poorer communication, voters are left uninformed about the parties they vote. I characterize the second effect of party instability as voters’ active response to having limited information. Namely, voters actively seek coping mechanisms within contexts of frequent party instability. I consider a number of decision-making strategies that have been lauded for requiring little effort and information on the part of voters.

Using original data on party changes and survey data from roughly fifty European elections included in the Comparative Studies of Electoral Systems (CSES) Modules 1-3, I show that voters rely on a unique set of decision-making heuristics to cope with the information shortfalls triggered by party instability. Due to lower levels of familiarity with transformed parties’ policy stances, voters rely on diffuse and less cognitively taxing perceptions of party positions (namely, the direction and intensity of policy stances) to choose between competing actors. Furthermore, voters are considerably more likely to be swayed by their gut feelings toward party leaders when voting for new and splinter parties, suggesting an elevated effect of leader charisma in the absence of clear policy positions. What is more, when parties undergo changes between elections, voters use instability as a cue in and of itself, thus minimizing risk by shunning lesser known initiatives on the ballot.

I consider further economic retrospective voting. Given that economic voting is generally held to be less informationally and cognitively demanding (Key 1966; Fiorina 1981), are voters more likely to simplify their voting calculus by relying on retrospective economic considerations? The empirical results answer in the negative. I argue that party instability comes head-to-head with the logic of economic voting. Voters weigh economic retrospections against organizational changes in incumbents in order to predict future governing capacity. Party instability interrupts the continuity of organisations and adds considerable uncertainty about the extent to which past performance is a good predictor of parties’ future governing capacity. As a result, it is less rational on the part of voters to rely on strict economic retrospections when casting a ballot for the incumbent.

My interpretation of the empirical findings generally affirms voters’ capacity to make reasoned decisions in complex electoral spaces. Voters pursue the rational strategy of relying on information that is accessible and do so efficiently by minimizing cognitive effort. Take the direction-intensity of party positions as an example. As the exact policy positions of newly formed parties are difficult to determine, voters who seek to make efficient use of their resources may well respond to extreme – yet clear – policy cues. Extreme policy positions in complex elections serve as useful cues to voters and thus have an important informational function in and of themselves. I thus conceive of voters’ reliance on direction-intensity rather than proximity rules as rational and efficient use of scarce information on party ideology.

I argue further that these decision-making mechanisms generally lead to good electoral outcomes. For one, the results suggest that voters are able to identify risk correctly. They are generally disinclined to hand over policy-making to newcomers who have no past record of governance and little credibility when it comes to policy. The findings on economic voting further confirm voters’ capacity to screen through important information and apply economic considerations to their vote choice when such considerations are credible. Overall the results speak well of voters’ decision-making capacities and ultimately constitutes good news for political representation. 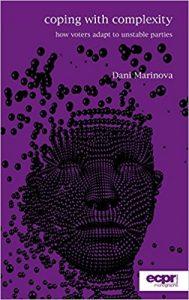