As the world peers into the crystal ball era of Brexit and President Trump, it has become clear that we need to talk about populism. These days, parties and politicians articulating what are regarded as populist views are to be found in established democracies globally. A vexing question however is do so-called populist sentiments shape vote choice? The Comparative Study of Electoral Systems (CSES) has responded with Module 5, which examines ‘citizens’ attitudes towards political elites, majority rule and out-groups in representative democracy’ as a priority. It runs from 2016 to 2021 inclusive and will be fielded in more than 40 countries. Data from countries that have fielded Module 5 are slowly becoming available. Using the CSES Module 5 component included in the Irish National Election Study (Marsh et al. 2016), we showed that some populist attitudes did motivate vote choice in the 2016 general election in Ireland. Here, we take advantage of the American National Election Study’s (ANES) 2016 data that included CSES Module 5, to focus on what impact populist sentiments had on Donald Trump’s victory.

Populism is ‘an ideology that considers society to be ultimately separated into two homogeneous and antagonistic groups…[and that] politics should be an expression of the volonté générale of the people’ (Mudde 2004). Arguments that the political elite is incompetent and/or corrupt; that a ‘great leader’ is needed to sweep all the problems aside; and that immigrants should ‘go home’ and leave the ‘worthy’ people to enjoy their existence in peace, are typical of what is referred to as populism. However, ‘chameleon-like’ variation exists across countries, and some question whether populism constitutes an ideology at all (Aslanidis 2016).

Donald Trump’s campaign ticked many so-called ‘populist’ boxes.  His descent by escalator in Trump Tower, New York, at his campaign launch in 2015, was accompanied by the pulse of a powerful rock anthem, with lyrics reaching out to the marginalized.[1]  The themes of his campaign were clear. Other countries dumped their problems on America. Career politicians were the incompetent puppets of wily lobbyists. A wall must be built to stop immigrant Mexicans, who were mostly ‘criminals’ and ‘rapists’. As the campaign progressed, these themes were extended. Republican opponent Jeb Bush was rebuked for campaigning in Spanish instead of insisting that immigrants should speak English.  Muslims came in for ire. Calls to ‘drain the swamp’, and slurs about ‘crooked Hillary’ showed great sticking power. The message was crystal clear: America was broken, needed to be made Great Again, and Mr. Trump cast himself as the saviour-in-waiting of the people. The question is whether such sentiments influenced American voters to support Donald Trump?

To answer this, we turn to the 2016 American National Election Study. It involved both face to face and online interviews with a representative sample of U.S. voters before and after the November election. Here, we explore whether anti-elitist sentiment, attitudes to immigration, and people’s views about the importance of not being truly American unless able to speak English, correlated with support for Mr. Trump. This is by no means an exhaustive list of the populist sentiments that might have driven Donald Trump’s vote and we recognize that other motivations could exist. But we confine our inquiry to some prominent dimensions that Mr. Trump himself highlighted during his campaign. Our analysis is based on a logit regression model capturing whether respondents voted for Donald Trump or not. Our model controls for a number of common factors known to influence American vote choice.[2]

ANES explores attitudes to immigration by asking voters whether immigrants are generally good for the American economy. Figure 1 shows that a majority of voters (56%) agreed they were but a sizeable minority, (20%) disagreed. Figure 2 shows the average predicted likelihood of supporting Mr. Trump based on perceptions of migrants’ contribution to the U.S. economy. Even taking into account other correlates of the vote, among those who strongly disagreed with the proposition there was a greater likelihood of supporting Donald Trump compared to those who agreed, to the tune of about 17 percentage points. 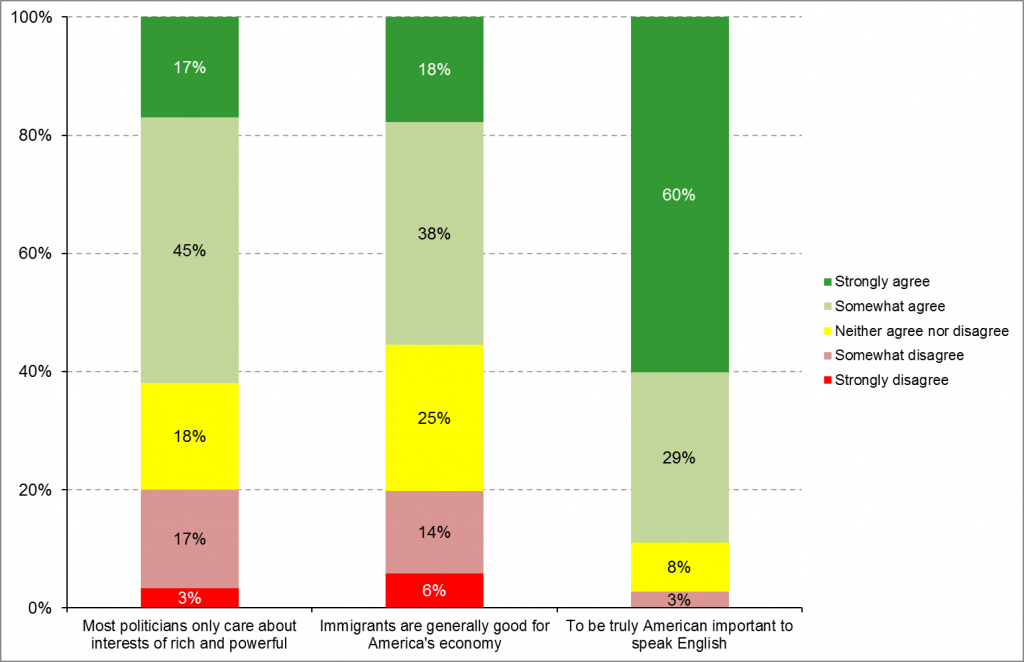 Figure 2: Average predicted effects of attitudes towards immigrants and likelihood of voting for Donald Trump in the 2016 U.S. Presidential election. 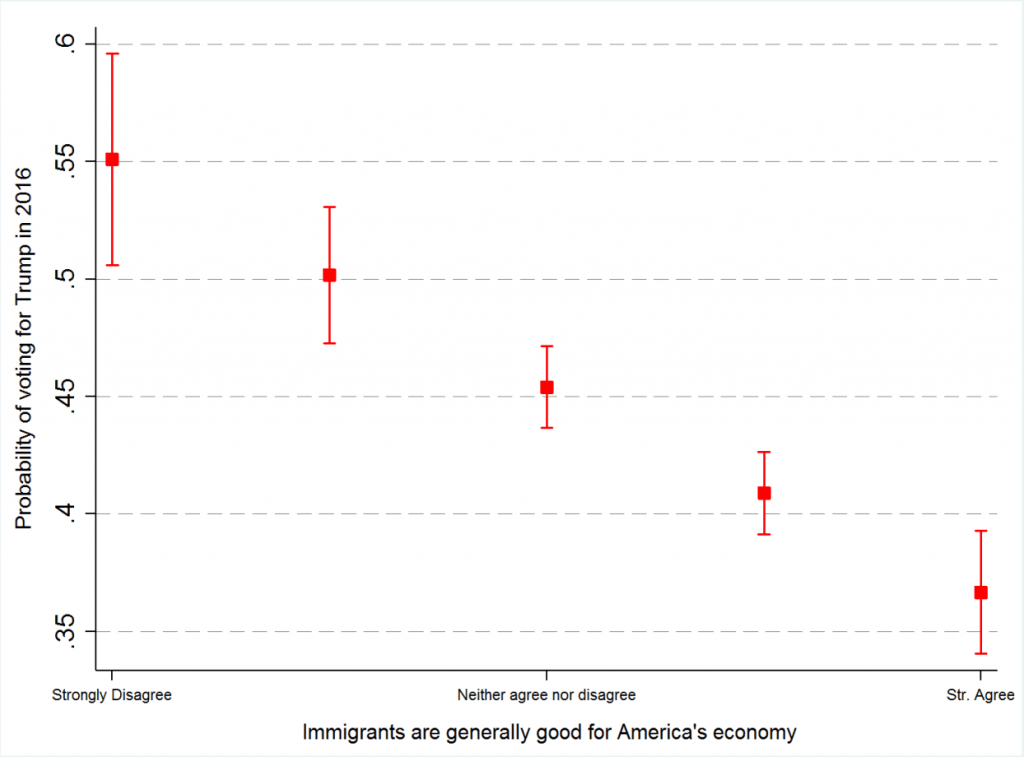 As mentioned above, Mr. Trump made headlines during the campaign by arguing that a crucial dimension of American identity was the ability to speak English. To tap voters’ attitudes, ANES asked whether voters agreed or disagreed with the statement that to be truly American, it is important to speak English. Figure 1 shows that an overwhelming majority of voters agreed that it was important (89%), with two thirds of this group strongly agreeing. Figure 3 shows that agreement with this proposition correlated with a greater likelihood of supporting Donald Trump. Voters who thought that being able to speak English was important to be truly America were substantially more likely to vote for Mr. Trump compared to those who thought it was unimportant, to the tune of 26 percentage points. Given that most voters agreed that speaking English was important, Mr. Trump was fishing into a well-stocked pool.

Finally, ANES explored voters’ views about elites through responses to the statement: Most politicians only care about the interests of the rich and powerful. Figure 1 shows that 62% of voters agreed with this statement. But its impact on Mr. Trump’s vote, when taking into account other factors, is muted. Further analysis suggests this is linked to partisanship, with Republican Party identifiers less likely to think that most politicians only care about the rich and powerful. This might suggest that anti-elitism doesn’t matter but before concluding this, deeper analysis is needed. What we can say for now is that immigration and identity appear to matter more.

Figure 3: Average predicted effects of attitudes towards being able to speak English is important to be truly American and likelihood of voting for Donald Trump in the 2016 U.S. Presidential election

So what do these preliminary findings suggest? First, so-called populist attitudes did motivate some people to support Donald Trump’s bid for the Presidency. Interestingly, we find that immigration and identity seemed to be more important than anti-elitism, although more in-depth analysis is needed to sustain this. Second, while populist sentiments mattered, our models also highlighted the strong influence of the old reliables – economic perceptions, race, gender, and partisanship. Thus, while populist sentiments drove some voters to Trump, his success is not entirely built on the populist dimension. Third, and taking a comparative perspective, the populist sentiments motivating vote choice in the United States were quite different from those that influenced voters in Ireland. This implies that populism is highly conditioned by context and that maybe even the “chameleon” metaphor overclaims coherence for the term. Thus, Module 5 of the CSES is especially timely and will enable us to tease this out more. Ours is unlikely to be the last word on the subject and we look forward to much further debate.

[1]     The song was Neil Young’s 1989 “Rockin’ in the Free World”
[2]     The fieldwork for the study was between September 2016 and January 2017 and further details of its design are available here. As per ANES advice (see p.iii-iv of codebook) and that of DeBell (2010), the analysis is weighted to accurately represent the U.S. population. For robustness, we also estimated our model without weights and using Taylor series estimation and the results do not differ substantially.