Does Space Matter? Explaining Abstention because of Indifference and Alienation

Does Space Matter?
Explaining Abstention because of Indifference and Alienation
Toni Rodon

ICYMI (In Case You Missed It), the following work was presented at the 2016 Annual Meeting of the American Political Science Association (APSA). The presentation, “Does Space Matter? Explaining Abstention because of Indifference and Alienation”, was part of a session dedicated to research using Comparative Study of Electoral Systems (CSES) data. The session, “Comparative Perspectives on Political Behaviour: Novel insights using the CSES”, was on September 4, 2016.

The concept of the ‘centre’ is overwhelmingly present in current political discourse. Labelling a candidate or party as left, right or centre is crucial to attracting voters, and highlighting this identifying factor is often employed during political debates to emphasise differences between candidates. This distinction is often raised by emerging political movements and constantly emphasised as a necessary, but not sufficient, condition for parties seeking to win an election. Discussion about the centre in political science research has not been an exception. Since Downs’ (1957) seminal work on ideology in political decision-making, the effects of convergence towards the centre, and similarly polarization, constitute a cornerstone in political science research.

Following the Downsian approach, the effect of this ideological distance has been employed multiple times in order to explain voting behaviour. Notwithstanding this popularity, a surprising gap remains: the impact of ideological distance on abstention. While the effect of ideological distance on voting for a particular party has been a popular tool, its effect on abstention has largely been ignored. This is despite the fact that in previous work Downs himself, as well as Enelow and Hinich (1984), have suggested that individuals may abstain from voting when a party’s priorities or values do not represent voters, otherwise known as “abstention because of alienation”. Voters may also abstain because of indifference between political alternatives that offer the same ideological package.

In my paper, “Does Space Matter? Explaining Abstention because of Indifference and Alienation”, presented at the annual meeting of the American Political Science Association (APSA) in Philadelphia, USA on September 4, 2016, I sought to examine whether alienation and/or indifference may impact an individual’s likelihood to turn out to vote. In analysing this question, I contribute to existing theoretical and empirical literature in four different ways:

1. In contrast to most of the previous literature, which uses an attitudinal approach, I tackle alienation and indifference under the spatial framework.
2. I design a research path in two steps in order to overcome previous methodological shortcomings, particularly the endogeneity between parties and individuals on the scale.
3. I take into account the “curse of multidimensionality” (alienation/indifference may not have the same effect across different issues).
4. I pay attention to plausible heterogeneous effects of ideological distance across the ideological space.

My research design proceeds in two steps: the first relies on data from the CSES. I use data from four CSES waves – a total of 110 country-elections from 34 different countries. This first observational part reveals that indifference has a small effect on turnout and alienation is not statistically significant. As Figure 1 illustrates, the effect of indifference is much lower than other covariates, such as education or political information. 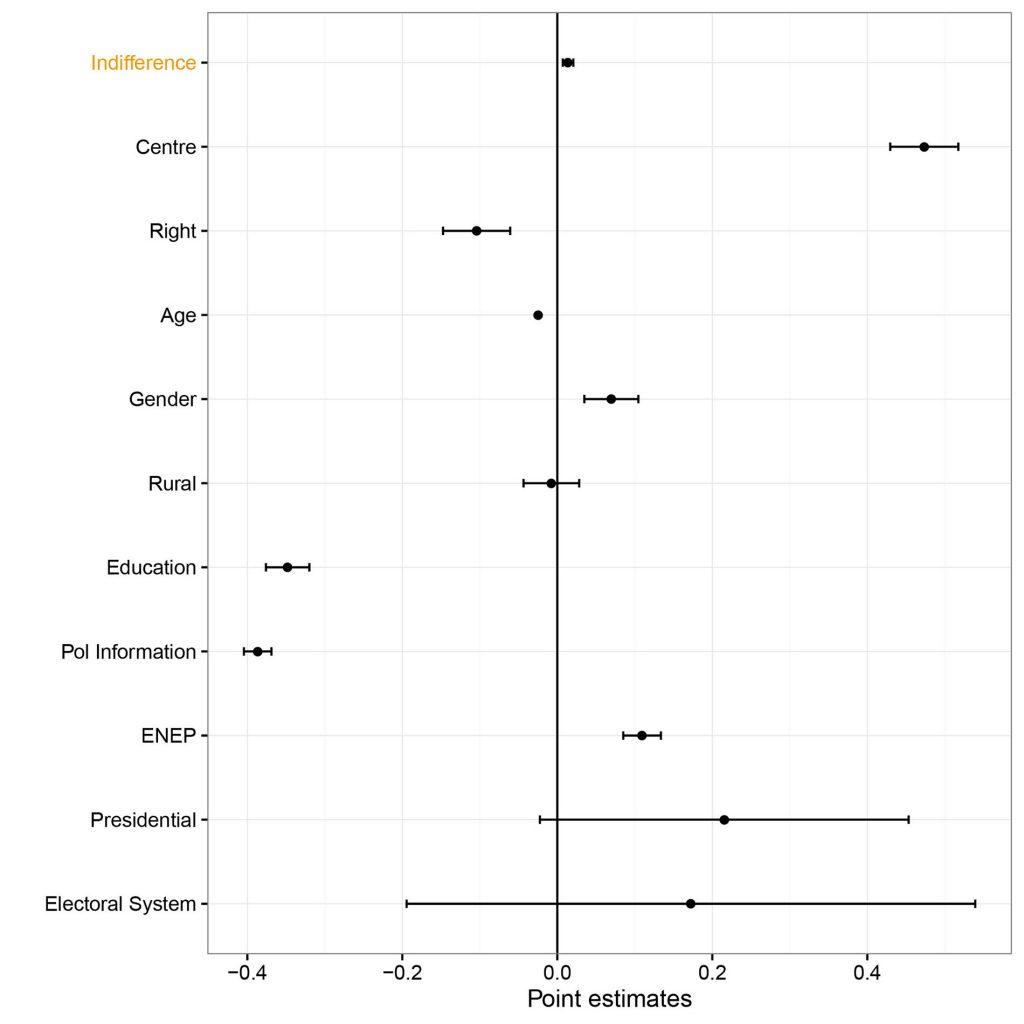 However, following my previous research (Rodon 2015) , I also show here that the effect of ideological distance on abstention differs across the ideological space. Figure 2 plots the interaction between indifference and individuals’ ideological position on the Left-Right scale. It shows that the effect of indifference is greater among centrists, while it has no effect on the left and on the right. In other words, when parties cluster around a centrist individual, she is more likely to abstain. Yet, the same party configuration does not have an effect on leftist and rightist individuals. 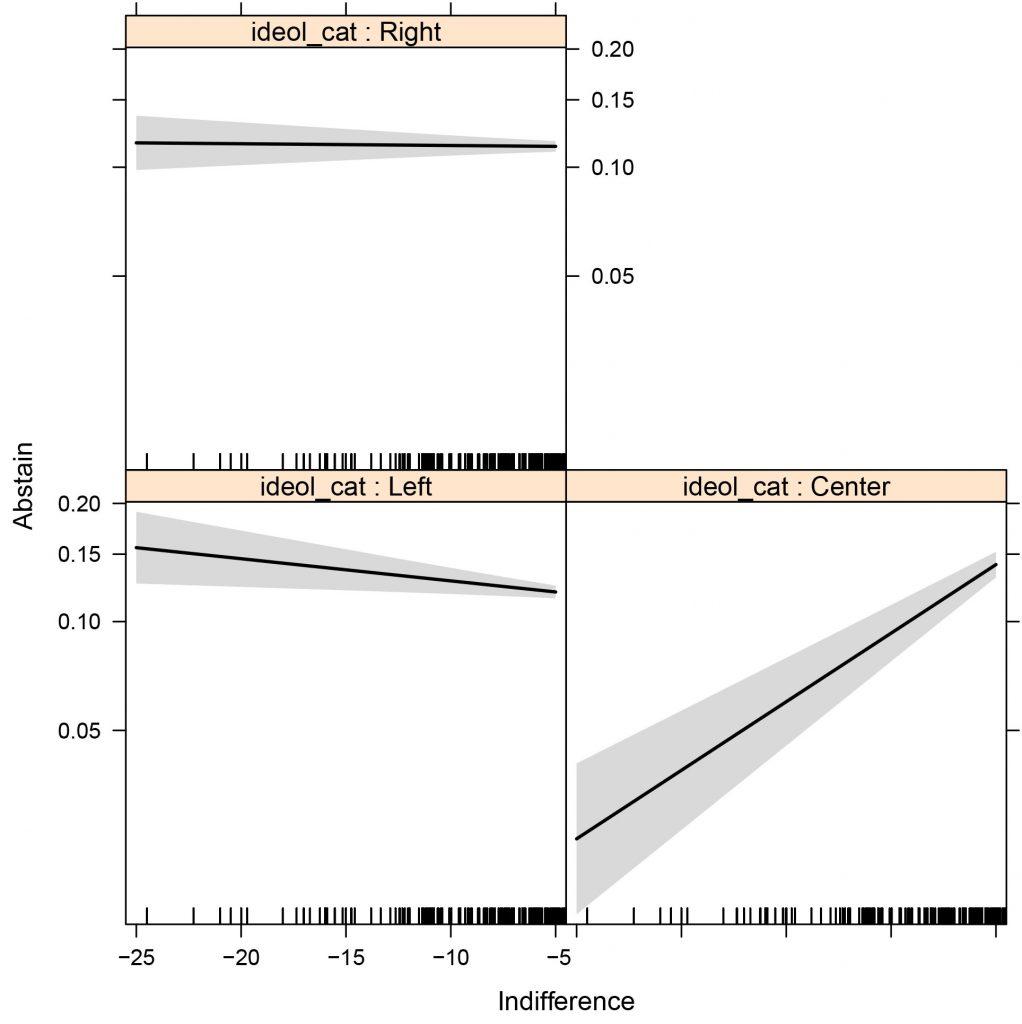 To further validate these findings, the second part of the paper tackles the same question using an experimental approach. To that effect, I designed an experiment whose main goal was to exogenize parties’ ideological position on the scale. After seeing a vignette with two anonymous candidates on the scale, participants were asked if they would vote for Candidate A, B, or abstain. The experiment was fielded in the US in March 2016 using participants from MTurk.

Results show again that indifference has an effect among centrists, while it does not affect liberals or conservatives’ probability to abstain. The third figure plots the marginal effect of indifference on abstaining. When candidates’ differential utility is zero (that is, when both candidates are providing the same utility), the likelihood to abstain jumps up. Yet, when one of the candidates breaks an indifferent scenario, centrist probability to abstain ceases to be significant. Furthermore, this result is consistent across different issues or issue priorities. 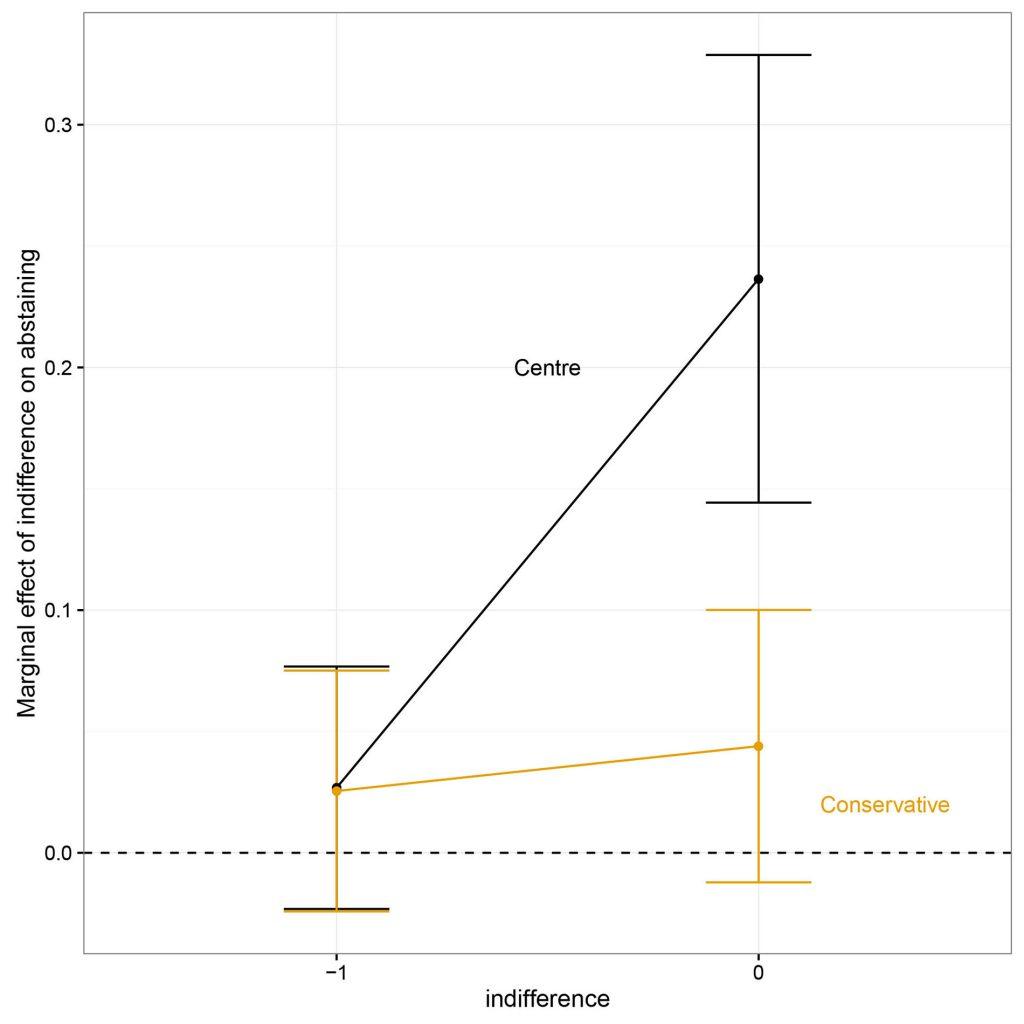 Although these findings are still preliminary, I believe they point to three relevant patterns: First, the effect of ideological distance on abstention seems to follow a different pattern than the effect of ideology on voting for a particular party or candidate. Second, ideological distance does not have the same effect across the ideological space: centrists behave differently than the rest. Finally, these results raise the need to take abstention into account in the literature on the effects of convergence/polarization. The idea that convergence towards the centre may prove beneficial could be a far cry if we forget that, once convergence has taken place, parties offer a comparatively lower ideological difference than in polarized environments, which may trigger abstention among the ‘kingmakers’.