Do citizens value fairness in the electoral competition?
Benjamin Ferland

Do citizens value fairness in the electoral competition? This is a central question that has interested scholars over the last decade. As we know, proportional electoral (PR) systems favour a more accurate translation of votes into seats while majoritarian systems have the tendency to “waste” the votes of many citizens. Inter alia, therefore, proportional representation electoral systems have the benefit of representing the voice of more citizens in legislatures and in the policy-making process. Scholars have thus assumed that citizens also share and even support this view of inclusiveness in the democratic process. What is puzzling, however, is that empirical results do not support such view. The relationship between a proportional votes-seats translation at elections and citizens evaluating positively the functioning of their democracy is at best tenuous. Why do we observe this disconnection between our normative expectations of inclusion and diversity in legislatures and such null empirical findings? Furthermore, if citizens do not value fairness in the electoral competition, why might this be? I tackle these questions using the Comparative Study of Electoral Systems (CSES) data in A rational or a virtuous citizenry? The asymmetric impact of biases in votes-seats translation on citizens’ satisfaction with democracy, published in Electoral Studies.

Politics as a competition between groups

A different approach is to conceive the democratic process, and elections in particular, as a competition between different groups, which want to influence the allocation of political and economic resources in society. In casting a vote, we should keep in mind that a citizen participates in this resource allocation by favouring one party over the others. This view of electoral politics is consistent, for example, with recent experimental studies that show that people tend to favour supporters of their partisan group (over non-supporters) when distributing a given some of money in series of dictator games. Overall, if we accept this view of electoral politics, our assumption about how electoral systems and especially the votes-seats translation may affect citizens’ assessment of their political system may be revised. From this perspective, instead of valuing fairness in the electoral competition, citizens should want their party to be advantaged in the electoral competition and the other parties to be disadvantaged. In other words, a citizen should prefer her party to receive a greater share of seats than votes and the other parties to receive a smaller proportion of seats than votes.

At a first glance, this assumption may fit well with current patterns in majoritarian electoral systems where voters winning their election are generally those that are advantaged by electoral rules. As shown in many studies, citizens tend to be more satisfied with the political system when they win elections. Should we, however, expect the same relationship to hold under PR electoral systems? I believe that it is the case. Even if being advantaged by electoral rules has fewer implications in terms of winning/losing in PR electoral systems it may still have significant implications for a party’s influence in the policy-making process. If the party is in government, it may receive a greater share of cabinet portfolios given Gamson’s Law while if the party is in opposition, it may still have a greater influence given that the policy-making process is generally “open” to opposition parties.

In order to test the validity of this assumption, I use survey data from the Comparative Study of Electoral Systems in 15 advanced industrial democracies over the 1996-2011 period. Through advanced statistical analyses, I find that citizens indeed prefer their party to be advantaged (and other parties to be disadvantaged) in the electoral competition under both majoritarian and PR electoral systems. The relationship is in fact even greater under PR systems when controlling for whether a voter’s party has won or not the election. I also find the relationship to be greater as a voter’s level of affinity toward her party and antipathy toward other parties increases. Figures 1 and 2 present the marginal effect of positive bias as affinity changes under PR and majoritarian systems, respectively. For values of affinity below 4, respondents are less satisfied if their party receives a positive bias in the votes-seats translation. Then, for values of affinity equal to and above 6 under both systems, respondents are more satisfied if their party has a positive bias. 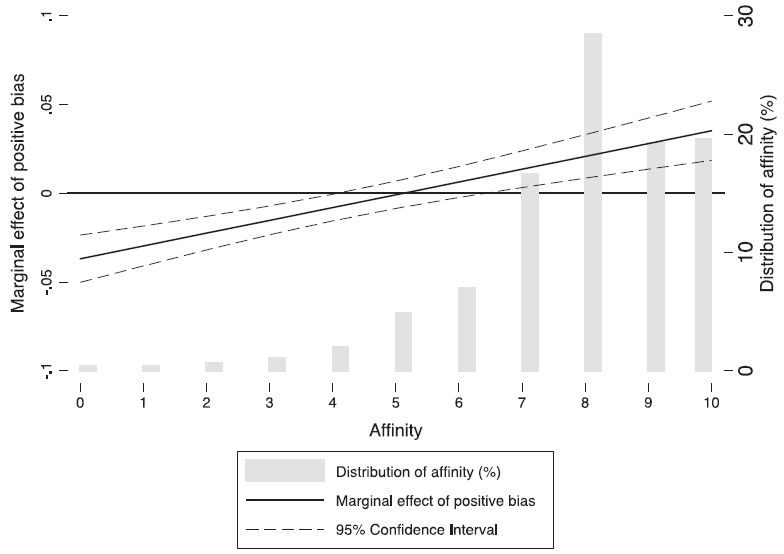 Overall, the findings are consistent with a conception of politics as a setting where groups are in competition with each other and where citizens prefer their group to be advantaged in the electoral results – to the detriment of other groups. While politicians and scholars generally agree with the fact that different voices in society should be represented in the democratic process it seems, however, that citizens do not share this perspective – at least to the same degree. In the end, my conclusion is that citizens’ assessment of the political system is fostered by rational considerations rather than virtuousness.

Ferland, B. (2015). A rational or a virtuous citizenry? – The asymmetric impact of biases in votes-seats translation on citizens’ satisfaction with democracy. Electoral Studies, 40, 394-408.